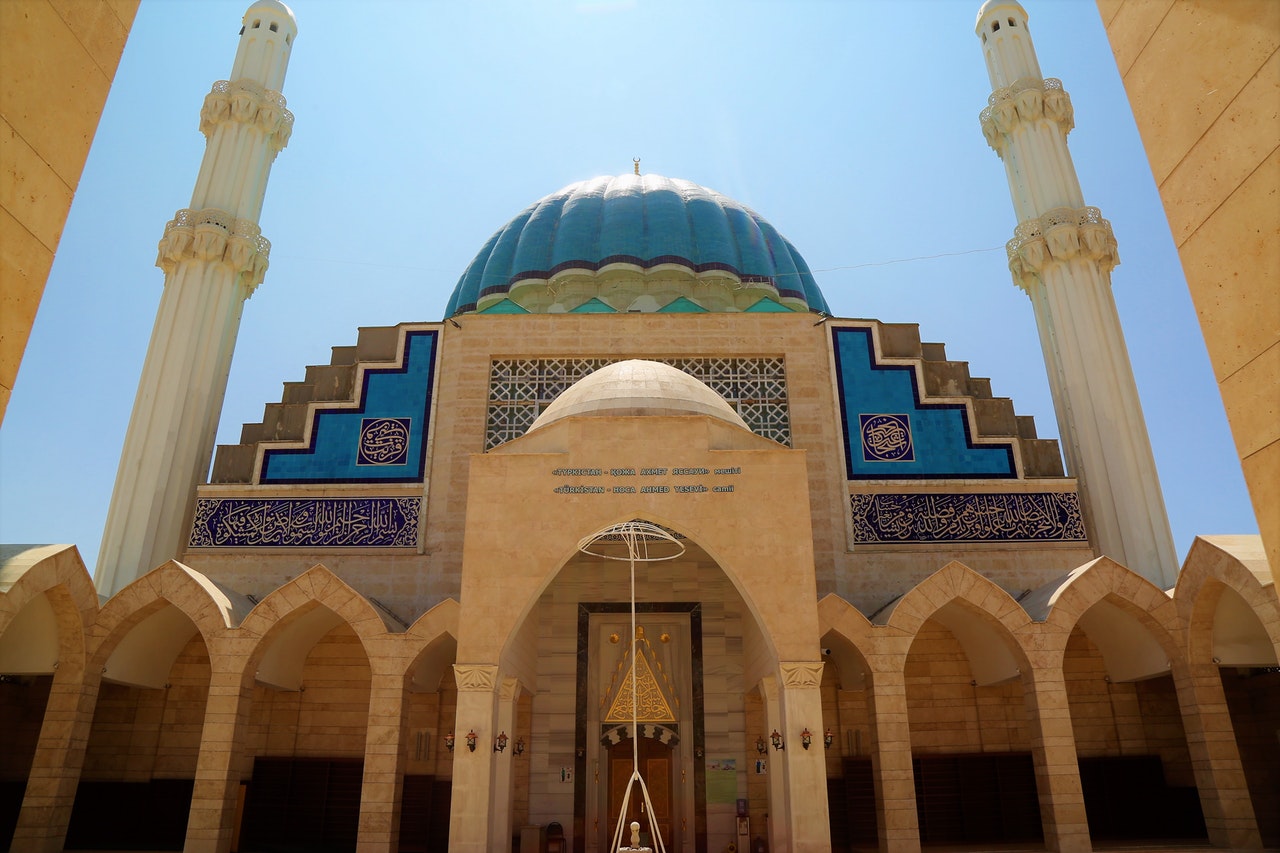 Iman in Islam: faith and practice in Islamic religion

In the 49th Surah of the Qur’an, an important distinction is made between belief and practice; Muhammad is instructed to correct those who claim they are believers, instead pointing out they have submitted to Allah’s will.

The bedouins say, “We have believed.” Say, “You have not [yet] believed; but say [instead], ‘We have submitted,’ for faith has not yet entered your hearts. And if you obey Allah and His Messenger, He will not deprive you from your deeds of anything. Indeed, Allah is Forgiving and Merciful.“

The Qur’an was acknowledging that within a political setting of conquest and power, some might ‘…consider it a favor to [Muhammad] that they have accepted Islam’ (Qur’an 49:17), even if they didn’t actually believe in his message. The Qur’an certainly accommodated those who followed the rules without fully embracing the underlying theology, stating: ‘…if you obey Allah and His Messenger, He will not deprive you from your deeds of anything’ (Qur’an 49:14).

However, it’s made clear that the religious life can only reach its summit when adherents believe ‘…in Allah and His Messenger and then doubt not but strive with their properties and their lives in the cause of Allah’ (Qur’an 49:14-17).

This attitude towards faith and practice created two overlapping categories: those who submit to external rules (Muslims) and those who truly believe (Mu’mins). While islam (submission) is the first step, it is enhanced by iman (faith), and finally perfected by a third stage of ihsan (perfection), where the external and internal precepts find expression in creative acts of worship (al-Bukhari, n.d.[a]).

The foundational code of conduct in Islam, which is agreed (with some differences) by both Sunni and Shia Muslims, are the five pillars: the shahadah; salat; zakat; sawm; and hajj (Herbert, 2012, p.11). The five pillars were alluded to in several passages of the Qur’an, but not actually codified until after Muhammad’s death.

The shahada is an affirmation of the doctrine of monotheism, and the status of Muhammad as the deity’s messenger (along with Muhammad’s son-in-law, Ali, for Shi’a Muslims, who call him the friend of God). The shahada is a personal declaration that must be stated out loud, binding together the individual with their community.

Salat is the performance of daily prayers, usually five times (dawn, noon, afternoon, sunset, and night), which involve a series of bodily postures, and preceded by ritual ablutions that cleanse the individual physically and spiritually.

Zakat is almsgiving, though those who do not have a surfeit of wealth are not expected to pay.

Sawm refers to the daylight fast during the holy month of Ramadan, which commemorates Muhammad’s first encounter with Jibril. The fast reminds people of the suffering of the hungry, focuses attention on remembrance of God, and brings the community together in shared hardship. The breaking of the fast each evening is cause for celebration, and the end of the month is marked by the festival of Eid.

The fifth pillar is Hajj, a pilgrimage to Mecca; this is a goal for all Muslims at some point in their life, although exemptions are made for the sick, elderly, and poor (Urubshurow, 2008, pp.154-157).

By following these principles, Muslims aim to emulate God’s messenger, and hope to please and serve God; the pillars also provide a unifying basis for Muslims across the world – a unity that reaches its apogee in the Hajj. Millions of people from multitudinous backgrounds come together on a pilgrimage that strips them of outward markers of identity and clothes them in simple garments and the shared language of Islam.

It would, however, be a mistake to assume that all Muslims pay their 2.5% zakat and pray five times without fail – there are varieties of expression across the Islamic world. In Kazakhstan, 67% of surveyed Muslims claimed to never perform salat, and only 58% of Muslims surveyed in Pakistan pay zakat (Hassan, 2002, in Herbert, 2012, pp.39-40).

This does not mean, necessarily, that these Muslims are any less religious. According to the Qur’an, internal attitude and belief is more important than the outward observance of ritual. The second surah says, ‘Righteousness is not that you turn your faces toward the east or the west, but [true] righteousness is [in] one who believes in Allah…’ (Qur’an 2:177).

Emphasis is also placed on the attitude behind prayer and almsgiving, ‘…woe to those who pray [but] who are heedless of their prayer - those who make show [of their deeds] and withhold [simple] assistance’ (Qur’an 107:4-7). This contrasts religious acts done for self-aggrandisement with the practical compassion of giving to the needy, and suggests punishment will accrue for those who do not adopt the correct attitude.

In the Qur’an, Muslims are enjoined to follow guidelines not merely for the sake of doing them, not even because it will make God happy, but because they are opportunities to express internal states which are themselves ways to serve and glorify God. In other words, God isn’t interested in the physical act of giving, but in the feeling of compassion and charity which motivates that act. This is made explicit in the 22nd surah, where it states ‘…[sacrificed animals] will not reach Allah, nor will their blood, but what reaches Him is piety from you’ (Qur’an 22:37); the animals themselves are incidental.

By expressing these internal states through rituals, Muslims not only serve God, they reinforce the personal and communal reality of their religious paradigm. This emphasis on belief was later developed into six articles of faith:

These articles of faith, according to Muslims, bring the individual closer to God, and make them better able to follow the commands and guidance in the Qur’an. This approach of codifying divine rules also led to the development of shari’a. Ruthven (2012) translates the term as ‘the way to a watering place’ and notes that it is a social structure of rituals, customs, and laws, aimed not only at ordering society, but making possible salvation (p.82).

Though shari’a is regarded as immutable and eternal, it has – by necessity – been interpreted and adapted by Islamic jurists to form the basis of civil law (also known as fiqh) in Muslim states around the world. In modern times, shari’a has been expressed in a variety of political contexts, from Saudi Arabia’s corporal punishments (such as flogging and stoning), to small family courts in the United Kingdom.

Belief that shari’a represents a divine ordnance draws Muslims towards it as a source of guidance and spiritual salvation, although how that divine law is constructed, interpreted, and enforced by humans in the world can vary dramatically; this in turn can cause misunderstandings and even conflicts. A Policy Exchange survey in 2016 found that, in Britain, some 43% of Muslim respondents would like to see some (undefined) aspects of shari’a law introduced in the UK, although this support diminished noticeably among younger, educated Muslims (Frampton, et al., 2016, pp.43-44).

This suggests that younger Muslims, who are raised in an ostensibly secular culture, may be adapting their religious outlook accordingly; the report’s authors also note that the public perception of shari’a since the spread of Islamic State is likely to have made some Muslims feel uneasy about supporting the concept.

However, there is another approach to shari’a. During the eighth century CE, while the jurists sought to please God through law, another group were concerned that this trend over-emphasised the material aspects of worship, and neglected personal and loving relationships with God (Urubshurow, 2008, p.141). This led to the emergence of the Sufis, who utilised sometimes unconventional methods in pursuit of God, and were less concerned about strictly observing the precepts of the ummah (community). In one Sufi fable, a man who had been piously (but incorrectly) pronouncing a sacred chant was nonetheless able to walk on water when the need arose (Shah, 1969, pp.84-85).

A well-known example of Sufi practice is the spinning dance of the Mevlevi Order (or Whirling Dervishes). This whirling is a form of remembrance of God (dhikr), and also a form of personal prayer that brings the individual into a collective movement – the centre of which embodies the holy centre of the Islamic world, the Ka’aba (Azziz, n.d.). This practice, though unique, is rooted in the Qur’anic framework of dhikr, illustrated by the Qur’an itself in 33:41-42: ‘O you who have believed, remember Allah with much remembrance and exalt Him morning and afternoon.’

Sufis, and other religious elders, do not hold universal sway in their communities; in Egypt they are trusted by approximately 52% of the population, while the learned Ulama enjoys 90%. It is worth bearing in mind they are still held in higher regard than the Egyptian parliament, whom just over a third of Egyptians trusted in a survey conducted in the late 1990s (Hassan, 2002, in Herbert, 2012, p.44).

One of the core beliefs in Islam is tawhid, or absolute monotheism, which is affirmed in the shahada. The corresponding sin is shirk – putting anything in place of, or alongside God as an equal. In a strict interpretation of tawhid, images of God, the prophet, and any person or living creature is forbidden; firstly because it may lead to idolatry (idolatry in service of God is still idolatry), secondly because creation is the province of God alone. Many ahadith (stories about the prophet) reference Muhammad’s condemnation of images: ‘Such people as paint these pictures will receive the severest punishment on the Day of Resurrection’ (al-Bukhari, n.d.[b]). This restriction, however, is not universal; representational art has been permitted in various Islamic cultures throughout history. Herbert (2012) suggests that the idea that all images are forbidden may have more to do with modern tensions over ‘…who or what is, or is not, ‘really’ Islamic, and who has the authority to judge…’ (p.76).

Ultimately, authority to judge how Islamic something is remains a difficult issue. The Qur’an makes clear that it is the sole resource in living a religious life, and therefore most Islamic beliefs and practices are tied to it in some way; yet many areas are not discussed, or remain ambivalent. The ahadith help to resolve this dilemma, yet contradict the injunction to follow only the Qur’an. In order to balance these competing claims to authority and truth, Muslims have attempted to build a way of life that integrates both, and structured their rituals and beliefs around the shari’a as they understand it. Clearly, Islam is not universal in its practices or even, perhaps, in its beliefs, yet it strives to combine the practice of submission with the principle of faith, and through these two complementary pathways, approach the oasis of God’s grace and mercy.